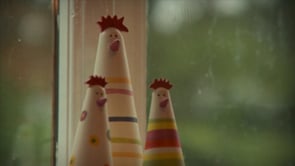 Today was a very significant day in my videography adventure, it was the day when I finally got my hands on a 35mm adapter!

For anyone who doesn’t already know what a 35mm adapter does, it’s basically a device that you fit to the front of the video camera that allows you to attach regular 35mm SLR lenses. The 35mm lens projects it’s image onto a piece of ground glass inside the adapter and the camera records that projected image.

The main reason for doing this is that it’s possible to achieve a much shallower depth of field than you would be able to with the standard lens without having to move a long way back and zoom in. It’s not all about depth of field however, the various 35mm adapters out there all offer a slightly different look to the image due to the type of ground glass inside them, and the way they operate.

One of the most noticeable differences between the various adapters out there is the bokeh effect they achieve. Bokeh is the way out of focus images appear.

By far the most popular 35mm adapter for the Sony EX1 is the Letus Extreme and I was very close to purchasing one, in fact I did actually place an order for one but decided to cancel it and spend a little longer making my decision.

Another of the big names in 35mm adapters is Cinevate who make an adapter called the Brevis35. The Brevis had some issues when used with the Sony EX1 so most people were not considering it over the Letus Extreme. Cinevate’s website however was listing a new version of the brevis that had been optimised for use with the EX1 and the few examples of footage I found that had been shot with it looked great. I much prefereed the bokeh of the Brevis over the Letus so decided to take the plunge and order one.

Along with the Brevis, I also ordered Cinevates Proteus rails, and the brevis to rail support which allow you to mount the camera and Brevis together in a manner that supports the weight of the brevis without putting strain on the camera lens. The rails also allow you to fit a lot of other accessories including focus pullers and matte boxes etc.

I’ll post a full report of my findings in the future but for now I’ll let my first shots video speak for itself.