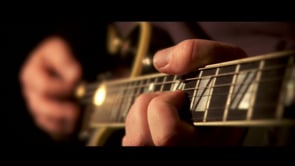 I wanted to try filming something against a dark background using lights so decided to make a short film based on my feelings towards setting up my guitar. I wanted to portray the mixed emotions I had about playing for a long time. I played in bands for many years but that ended with a big bust up between band members who were also my best friends. I struggled to play guitar for many years after that happened and was trying to portray that feelings I had of wanting to play but it seeming a bit pointless and emotionally painful.

The first thing I did was make a quick shot list outlining the parts of the set-up process that I could show, this helped a lot once I was shooting as it’s so easy to get side tracked and forget things.

Then it was just a case of setting up the some lights, experimenting with exposure and lighting levels and then positioning the camera for each short. I also recorded sound on some of the shots so I set my shotgun mic up on a stand as close as possible without being in the shot.

Everything was filmed with my EX1 and Brevis with the nikon 50mm f1.4 lens. The lens was at F2 and the camera was wide open shooting at 1080p/25 with shutter at 50.

The hardest shot to get was the one where the valves glow blue, for this I had to use the EX1’s frame accumulation feature which takes 16 frames and combines them into a single much more exposed frame.

I used a pair of dedolights for illumination, making sure to keep the beam as narrow as possible at all times so as not to illuminate other features in the room.

Looking back at the results there’s plenty of things i would have done differently, the shot of the wires on the floor is really shaky and I’m not keen on the way the lens breathes as I did a focus pull as the guitar lead was plugged into the amp, mind you i did both myself so it was a little awkward!