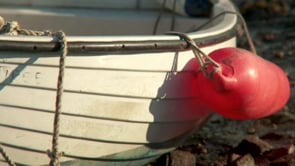 I’m not sure why I woke up at 6am on the morning of the 29th October 2008, but I’m glad I did. The sun wasn’t even close to rising but what little light there was had that magic feeling about it, it was going to be one of those colourful mornings ideal for filming.

After a quick coffee to warm up I packed up my EX1, Brevis, 2 nikon lenses, Glidetrack & Tripod and headed down to Morston, which is a small muddy harbour popular with sailboat owners and seal watchers.

On arrival the first thing I did was put the Glidetrack on my tripod, mounted the camera on top of that and fitted my 50mm f1.4 nikon to the brevis.

Once everything was set up and ready I started getting a few shots with the glidetrack on the tripod, I found this a bit of a handful though and I much prefer using the glidetrack on it’s own. I decided to dump the tripod in the car and continue shooting with just the glidetrack for a while.
I got a few interesting shots around a viewing tower that’s been built for bird watchers and the like. The shot where I pointed the camera up the steps was very tricky, having the camera tilted back so far makes the glidetrack very hard to push. I got some intersting shots up on the platform though, nicely abstract just as I like them.
I used the glidetrack for a while longer, switching between the 50mm and 135mm nikons depending on the shot. The picture below shows the glidetrack setup for the shot where the camera follows an old piece of rope which is tied to a rusty [what’s it called?]. Spot the silly mistake in that shot!

As the sun was getting brighter I was starting to struggle with overexposure. You can’t really close down the nikon or it will reveal the the ground glass in the brevis so I tend to use the ND filters and aperture on the EX1 to control exposure. I don’t like closing down past f8 so if I’m getting close to that point I engage the next ND level. I’ve read that it’s not a good idea to use the cameras built in ND with a 35mm adapter, so I need to invest in some ND glass to use in front of the lens.
After a while I swapped the glidetrack for my tripod and wandered around getting various shots that I could mix in with the glidetrack footage. The guys from the Seal watching companies started moving their boats around which gave me a chance to shoot something with a bit more movement!
The last shot I got was of somebody walking his dogs, he was on a long path and I saw him coming from a way off so I set the camera to 720/25p, switched the shutter off and then selected S&Q @ 50 to get him walking past in slow motion. I always feel a little awkward doing this so tend to make it look like I’m preparing to shoot rather than actually filming to make people feel less uneasy.

Editing
The first thing I usually do when I get home from a shoot like this is to make myself a cup of coffee, plug the EX1 into our 40″ LCD TV and watch everything I’ve just shot. By doing this I have a really good understanding of which clips are on the camera.

After transferring the clips into Final Cut I like to decide on the audio track I’m going to use before laying any edits down. Once I’ve decided on an audio track and imported it into my project I start the footage transfer process. Because I tend to delete bad takes on the camera I usually prefer to transfer all of the video I’ve shot into the editor.

After all the video is in Final Cut I simply start going through all the clips marking in and out points and then dragging the resulting subclips onto my timeline. I end up with a long timeline of basic edits that are neither cut to the audio or in the correct order. From their I just change the order of the clips and start moving the cuts around until they feel right.

I often grade my footage, either with the tools in Final Cut or with Magic Bullet Looks. In this instance I didn’t use any as the natural light provided such lovely colours anyway.