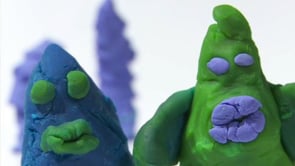 This was a fun experiment trying out the frame record function on the EX1. We curved an old poster to create a small infinity curve and then asked the kids to make some figures out of their playdoh. I used my two dedolights for illumination and then it was just a case of doing the usual stop motion thing of making small changes between each press of the record button on the EX1.

We ran into some difficulty as the heat from the lights started to make the playdoh stick to the poster, and worse still started causing limbs to fall off!

I extracted the audio from some footage I’d shot previously of the kids and made it fit best I could, we had no idea of what we were going to do with it whilst shooting though so it came together quite well considering!

music: “Baby’s Home” by The Lemonheads