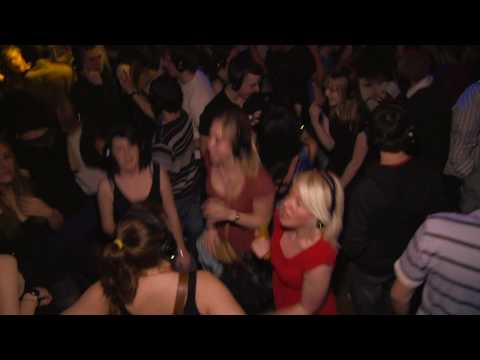 A Silent Disco is a new and unique concept sweeping the UK that does away with the traditional speaker systems used in nightclubs or festivals and instead issues visitors with wireless headphones that allow the wearer to choose to listen to one of two live DJ ‘s performing at the event.

SilentArena, the UK ‘s premier Silent Disco providers, asked me to shoot a Silent Disco that was held at the University of East Anglia ‘s LCR on the 19th February.

I used my EX1 on a multi-rig pro to allow me to be mobile and mingle with the crowds. Because all of the visitors were wearing headphones I was able to transmit the music from one of the DJ ‘s to the camera wirelessly as well as use a shotgun mic to record people singing along to the music on a separate channel.

I hired a Sony on camera LED light to give some fill for the dark scenes, because the light is able to be adjusted in brightness it allowed me to get just enough light onto the crowd without making them look out of place in the dark or colour lit surroundings.

Find out more about silent arena and silent disco’s at www.silentarena.com

Thanks to Shane for the photo’s.