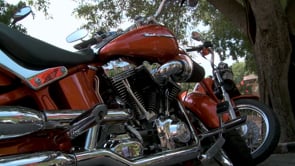 Having Harley-Davidson ask me to shoot their Euro Festival event in Grimaud & St Tropez definitely ranks as one of the most exciting things to happen in my career so far. The brief was to create various videos for delivery on the H.O.G (Harley Owners Group) Members website. The locations included the event ground itself which was based in Grimaud, a custom bike competition in a nearby village, various bands on two stages over the three nights, and the main parade which took place in St Tropez.

The video above is the longer of two event videos created, I also supplied ten clips showcasing the winners of each category in a custom bike competition that took place in a nearby village.

I was limited to 32Kg of baggage for this trip so deciding what gear to take proved to be an interesting challenge. After more trials than I care to remember I finally settled on taking my EX1, macbook-pro, Miller tripod and DVTEC Multirig, along with the basic accessories such as batteries, chargers, rain cover etc etc.

Carrying the miller tripod and the EX1 around the event proved to be quite easy, certainly a lot easier than it would have been with my Manfrotto tripod. Because I was working alone I had to be very careful with the amount of gear that I took out with me each day, if I took too much I got tired too quickly and I had a lot of ground to cover. Also, shooting from 10am until the early hours three nights in a row takes it’s toll, the last thing you need is to be carrying too much kit.

So with each trip out from the hotel I chose either the multirig or the tripod and put my basic accessories in a small lowepro slingshot bag. I’d shoot until I’d either run out of card space (3 hrs) or I needed a rest, at which point I’d return to the hotel, offload footage to the Macbook Pro and swap batteries ready for another outing.

I was lucky enough to be entrusted with a 4×4 hire car (more jeep than car) which made things easy when planning trips to shoot at other locations. On a few occasions I set the camera up in the back of the truck and asked a colleague to drive while I left the tailgate up and grabbed shots of Harley riders as they followed the car. They took a bit of encouraging to stay behind us but once they realised they were being filmed by a Harley-Davidson Crew they were more than happy to oblige with nice hand gestures and big smiles.

Shooting the event was a fantastic experience, and luckily Harley-Davidson liked the results so much that they’ve hired me for their next European event in Latvia next month… I can’t wait!