Okay, so yesterday I decided to order the new CINEfocus from Shoot35, at £349 it’s one of the more reasonably priced follow focus units on the market with competitive products form the likes of Cinevate, Zacuto and Arri costing way more than the CINEfocus.

The CINEfocus seems to be priced to be competitive with the RedRock Micro follow focus. I decided to go for the CINEfocus over the redrock because of it’s all metal custom gearbox and the pointer which can rotate through 360 degrees. The redrock has a fixed, and apparently flimsy pointer and uses an off the shelf gearbox that’s apparently prone to issues over time.

Within about two minutes of placing my order at www.shoot35.com, I had an email with with UPS tracking details!

The box turned up today and I thought I’d share the pleasure of opening it with you.

No doubt about what’s in the box!

The CINEfocus comes in it’s own custom case, a very nice addition. I don’t actually like having too many small cases, preferring a few bigger Peli cases but this is a nice touch.

So, now for the fun part!

I ordered 3 additional lens rings, although that turned out to be a mistake, more on that later.

Picking the CINEfocus up give me that nice sensation that only comes from a piece of kit that immediately strikes you s being a well built and quality piece of engineering. It’s pretty heavy, heavier than I expected. The marking disk is fixed magnetically and although it’s easy to take off it’s held firmly enough that it’s never likely to come off unintentionally.

I also ordered the speed crank

The first thing I tried the CINEfocus on was my EX1 rig. I purchased a redrock micro lens gear for the ex1 because I knew the Shoot35 gears wouldn’t work.

The main drive gear on the CINEfocus can be placed on either side of the gearbox, to remove it though you need a tiny allen key, which is supplied. It would have been nice if the gear were magnetic and changeable without tools. I had to change it’s position when switching to the 5D so I can see that little process becoming a chore.

Everything seems to work just fine on the EX1, the follow focus is smooth and free from play. I’ve not had any experience with follow focus units before so I can’t really compare it to other products, but it seems solid, fluid in use and very accurate.

The speed crank fit’s easily into the CINEfocus however there is a small amount of play between the two when in use. I also tried a redrock 12″ whip which which was a very tight fit indeed, so tight that I struggled to remove it! That might be down to everything being new though.

This took some fiddling because my Genus camera support isn’t really ideal for mounting a follow focus due to the rods not running back far enough under the camera. I had to position the camera well forward on the base plate which means a lot of useless metal sticking out the back of the rig. I need to invest in a better set of rails for use with the 5D.

Here’s where I ran into the biggest problem. The lens gears that come with the CINEfocus do not fit most of my lenses. I can just about squeeze one onto my 35mm 1.4 as shown below by not using the supplied rubber band that protects the lens, but there’s no hope of fitting them to my 50mm 1.2 or 70-200 2.8. I’ll have to look for other options for lens gears.

I spoke to Wayne at Shoot35 who said that they are working on a more flexible solution which will be available in the near future. Hopefully it’ll be something along the lines of the Zacuto Zip gear, which is a really nice solution but ridiculously expensive at over £100 a lens!

Again the CINEfocus worked well on the 5D. You have to be careful when using focus marks with the L Series lenses though, unlike my old Nikkor manual lenses the focus rings on these continue to rotate past their end stops, and once you’ve done that any marks you’ve made on the focus disk will be totally out.

My initial impressions are that it’s a super quality product and works extremely well. Above all the CINEfocus seems like it’s really good value for money, especially if like me your based in the UK and you’re used to paying for oversees shipping and import taxes when ordering from the US or Canada.

It’s a shame the lens gears are not more flexible, You definitely need to look elsewhere when using EOS L Series lenses.

To find out more about the CINEfocus visit shoot35’s website. 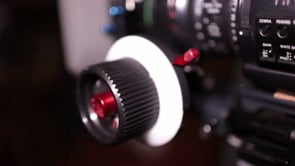