Update: Since October 2012 I’ve switched over to the Kessler Stealth slider.

I recently upgraded my original (SD) track for the uprated HD version, this offers a much stiffer bar and a mounting plate that’s much better suited to my EX1 than the original one was. The only down side to the beefy HD is the weight of it, it’s no longer an easy thing to carry around all day, but that doesn’t matter because there’s also a new lightweight Glidetrack… the “Shooter”.

Like all Glidetracks, the shooter comes in various lengths, mine is a half meter model. The Glidetrack shooter features smaller lighter feet than it’s bigger brothers and the track is the same size as the SD range so the whole thing is very lightweight and easy to carry around. What makes the Shooter special though is that Alastair has added a few bits of bling to it to make it also function as a shoulder mount. The front foot has a pair of legs that rotate and lock into position to form handles. The slide mechanism can also be locked too by tightening a small thumbscrew on the side of the mounting plate. There’s also a small foam pad on the bottom of the track that provides some comfort if using the shooter as a shoulder rig.

The Glidetrack shooter is by no means a competitor to dedicated shoulder mount systems, but as a portable dolly, being able to function as a shoulder support too makes it a very useful piece of kit to have, especially if you shoot with a DSLR. I was never really comfortable mounting the 1m SD on a tripod, but the half meter shooter is great for use on legs, I’ve even been using it mounted to the top of a carbon stills tripod by Manfrotto.

Whilst I had the Glidetracks on my Kitchen table I couldn’t resist having a little play with them, here’s the results. 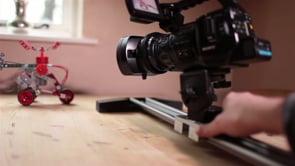 You might have realised by now that I love my glidetracks, they give you amazingly professional results for a relatively low cost. The Shooter is an excellent addition to the line is highly recommended for anyone who shoots with a DSLR.

Update: Since October 2012 I’ve switched over to the Kessler Stealth slider.