Canonrumors have released a photo from a slide show in Poland showing a feature list for the much anticipated 5D firmware update. 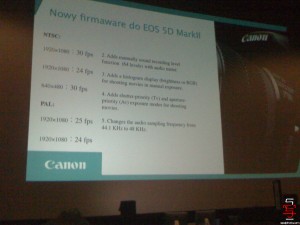 There’s no mention of 720p frame rates but after trying that mode on the 7D and not being impressed with the quality I’m not really bothered about 720, the EX1 is way better for that job. It will be great to have native 25p though!

Theres’s also some surprises in the list;
– Manual sound (gain control) with 64 levels and an on screen meter!
– Histogram whilst recording video
– Av & Tv modes whilst shooting video – Couldn’t we already shoot video in those modes?
– Audio sampling changed from 44.1 KHz to 48 KHz.

All great stuff. There’s apparently also been a release date of March 17th bouncing around on the web, let’s hope this is all true!