The pair of GoPro cameras I ordered for the Harley-Davidson documentary arrived today and they look like they’re going to be pretty handy. Because I wanted a range of mounting options I decided to go for one HD Helmet Hero pack and one HD Motor Sports Hero pack plus a bunch of accessories including four additional batteries, a handlebar mount and a suction mount.

These little cameras are supplied in waterproof housings and considering their small size actually record pretty nice quality video. of course it’s nothing like the quality you would expect of a 5D mark II, but then even though the 5D is smaller than my EX1 I still don’t want it on top of the helmet!

I’ll write some more about these cool little cameras soon when I get out and test them on my bike, but just to give you a rough idea of their capabilities they can shoot in 1080/3op and even 720/60p which should be great for doing slow motion. They have an incredibly wide lens which is even more extreme when shooting in the 720p mode.

I was faced with a slight problem in that they do not come with a charger unit and require charging via USB. This is great under normal circumstances but I didn’t plan on taking my laptop on the road so I had to find an alternative solution. I decided to give my iPhone charger a whirl as that uses a USB connector and it seems to do the trick just fine. I have two of those so problem solved.

If you’re interested in trying them out for yourself B&H Photo Video sells the whole range.

Here’s a really cool example of what these things can do. 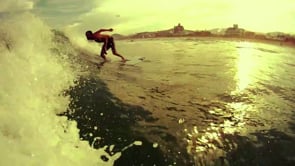