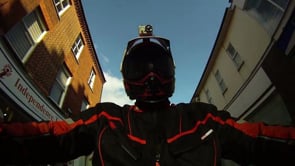 Something special happened today that I look forward to every year, it was the day when my bike came out to play for the first time after spending the winter in hibernation.

Apart from the usual pampering that the bike normally gets before it’s first outing of the year I also set up my new GoPro cameras for they’re first test run. One was mounted permanently on top of my helmet and the other was moved around the bike a bit to see how it coped with vibration and shock.

Both cameras were recording at 720/60p which although is not the best quality option does allow you to create nice slow-mo footage by confirming it to 25 fps in cinema tools.

The only problem I had with the cameras themselves were minor, firstly the lenses kept fogging up, I’m not sure if this was due to it being pretty cold but I had to keep stopping and opening the waterproof housings to let the lenses de-mist. I also didn’t have the angle of the helmet camera right, I’ll correct that next time!

Generally the biggest weakness is rolling shutter which results in a lot of wobble where there’s vibration. It’s not impossible though, I’d be happy using at lease some of the shots.