Read Part 1 – Preparation and the ride to the event 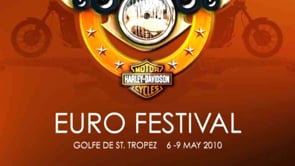 EX1 – over-cranking and audio
I shot the majority of this event using my EX1. I normally shoot these at 720/25p and switch on S&Q motion (overcrank) from time to time when I want some slow motion footage. The only problem with this approach is that the EX1 doesn ‘t record any audio when running S&Q. I ran into a problem last year when the client asked for audio from part of a sequence I ‘d shot in slow-mo so needed another approach this year.

I decided to do two things differently, firstly I took along my Zoom H4n audio recorder and whenever possible asked the guys running the sound desks to give me a feed so that I could have a non-stop audio recording regardless of what I did with the camera. I also decided to shoot the whole event in 720/50p mode so that I could create slow-mo in post using cinema tools and be able to use the footage on a 25p timeline with audio should I need it.

Because I planned to export the video back to 25p I turned the shutter off, effectively giving each frame 1/50th of a second of exposure giving it the same amount of motion blur as 25p in the hope it would produce similar results once reduced to 720/25. This theory didn ‘t really work out that well, when I imported my 50p clips into a 25p timeline the footage didn ‘t look as fluid as I ‘d normally expect from 25p. Edited on a 720/50p timeline the footage played correctly, but when exported out at 25p I still wasn ‘t overly happy with the results. I ‘ll need to look into this one a bit further.

One other downside to the 720/50 route to slow-mo is that cinema tools can ‘t conform XDCAM-EX footage, it needs to be transcoded to Pro-Res first which could take a lot of time considering I had hours of footage. I handled this by going through the footage and creating a sequence with all my favourite shots in which I then exported out as a 720/50p ProRes file which was then conformed in Cinema Tools and reimported for use in my edit.

Custom bike tracking shots
I used my 5D & glidetrack shooter rig during the events custom bike show. As well as being a very light and portable rig for tracking shots the results are some of the nicest looking custom bike shots I ‘ve managed at an event so far, I ‘ll definitely be using it again. Using the Manfrotto 394 quick release plates to switch between tripod and ground shots worked a treat too.

Using the Canon 5D
I made the decision before leaving to shoot this event that I was going to shoot the majority of it on my Sony EX1 with the exception being the tracking shots on the glidetrack.

I did however also want to experiment with the 5D so I ventured out a couple of times with it on a DV Multirig. One area where the 5D shines is in low light environments so I took it instead of the EX1 when I headed out to film a couple of bands and the party goers watching them. Shots such as bar scenes and people dancing on the beach being lit by the stage lights were brought to life by the 5D where the EX1 would have either been dark shadows or a grainy mess. I did however discover a limitation with the 5D that I wasn ‘t aware of before this event.

I was shooting some guys riding Harleys through the event ground with their headlights on and noticed black dots appearing in the middle of the headlights. On reviewing the footage these black dots appear anywhere in the image that ‘s ultra bright. This also happened on occasion when shooting the bands and a stage light would shine on the camera, the light would become a small black spot on the image.

I ‘ve mixed up things quite a bit in the event video, to me the 5D shots are all very obvious but I ‘m not sure they always represent the best looking images. The tracking shots of the custom bikes look good, but some of the crowd shots from the event have a kind of ‘mobile phone’ look about them rather than the deep focus, ultra clear HD images that the EX1 usually gathers.

Manfrotto Monopod
This was the first event I ‘ve shot where I took the Manfrotto monopod along. In theory the monopod should be ideal in this environment as it ‘s fairly low profile and yet allows for steady panning or tilting shots when required. In use though I found the monopod to be a bit of a failure. It was easier to carry than something like my Miller DS-2o tripod but I found it quite useless for trying to get smooth panning shots. Fast pans were a little better, but trying to pan slowly resulted in a kind of clicking action from the fluid cartridge in the base that was very visible in the resulting footage. I won ‘t be taking it again.

Workflow
My workflow changed slightly at this event mainly due to the use of the Nexto DI NVS2500. For footage offloads I continued what I ‘d started on the ride to the event by offloading my media cards to the NVS at the end of each day and then syncing it to an external drive.

I did have one scary moment when the external drive I was using developed some kind of fault that could only be fixed by formatting it and re-syncing. This took a couple of hours to complete, during which time I felt particularly vulnerable knowing the footage was solely on the NVS hard drive but the device performed perfectly and allowed me to re-sync my data once the external drive had been reformatted.

All in all the shooting at the event went well, I had no major problems with equipment etc. The weather even started to look up, we had the occasional shower but it stayed dry for the most part with a fair amount of sun thrown in.