Until recently if I wanted to take my DSLR with me to shoot an event or just have a camera with me for a family trip I ‘d struggle trying to choose which lens / lenses to take. The 50mm 1.2 is an awesome lens for general shots and in low light but there ‘s times when it ‘s just not wide or long enough. The 70-200 IS 2.8 is an awesome zoom but it’s heavy and you’ll soon find yourself wanting to go wider. There’s nothing to stop me putting all three lenses in a bag of course, but you’re then lugging a lot of weight around and having to deal with constant lens changes.

Swapping lenses for each shot is fine on a set, but if you ‘re shooting an event or just grabbing family shots you need to be ready to shoot quickly, you can ‘t generally ask somebody to hang on while you swap lenses. And who wants to be carrying all that gear around on a family day out?

Do I really need another lens?

It seems the answer to that question was yes, what I needed in my collection was a lens I could throw on the 5D that would provide a decent zoom range for everyday shooting. With this in mind I decided to try Canon’s 24-105mm F4 L IS USM. Like my other L series lenses the 24-105 is built for professional use, it’s very solid, weather-sealed and just feels like it’s going to last.

The ‘USM’ or Ultra-Sonic Motor is another important factor for me, this is a technology that allows you to use the cameras autofocus function as well as focus manually without having to engage / disengage a switch as is required in some non USM lenses. I use the ‘one touch’ autofocus feature in my DSLR’s a lot, I remap the AF-ON button on the back of the camera and use that instead of the shutter release button. I also like to be able to grab the lens and focus manually though, without the need to disengage the autofocus system.

I’m not going to go too far into the benefits of choosing L lenses over other options in this review, I buy L lenses because I use them as a professional and appreciate their superior build quality and ruggedness. I’m sure there are image quality differences too but to be honest I’ll leave the explanation of that to reviewers who are much more technically minded when it comes to optics, there’s some great reviews out there from still photographers who are a lot more critical about the optical aspects of lenses.

With a max aperture of F4 the 24-105 isn ‘t particularly fast, it won ‘t make a great lens for low light environments at that speed but where this lens shines is for general purpose daytime shots. Of course the lens offers a constant aperture throughout it’s zoom range, this is a ‘must have’ for me, I don’t want my exposure to change if I decide to reframe by changing focal length. With a zoom range from 24mm to 105mm the lens offers a lot of flexibility from really wide through to a very usable telephoto.

Canon also offer another L series medium zoom that ‘s popular amongst pro shooters in the form of the EF 24-70 f/2.8 L USM. At f2.8 this lens is slightly faster than the 24-105 and would be a bit more flexible if you need some ability to shoot in lower light. I ‘ve used the 24-70 and it ‘s a lovely lens, but it ‘s missing one major feature that the 24-105 has, in the form of a built in image stabilizer (IS). For me the 2.8 would be also be too slow for low-light work so rather than carrying around the heavier 24-70 I prefer the idea of using the lighter 24-105 with it’s built in image stabilizer and carrying a fast 50 for when the light goes.

The Image Stabilizer in the 24-105 was designed for shooting stills, but it also does a great job of smoothing out video. You should not underestimate what IS can do your video shooting, it really does make a huge difference. To give you an idea of how effective it is have a look at the video below which was shot on my Canon 5D both with and without IS switched on. I shot at the telephoto end of the lens (105mm) and used an LCDVF to help stabilize the camera to the best of my ability but as you can see the IS on the lens worked wonders. 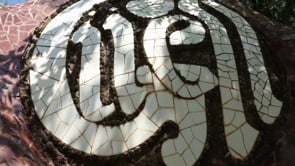 One downside to the IS system on the 24-105 is that it ‘s quite noisy, it’s a lot quieter than the 70-200 but you still wouldn ‘t want to be recording sound on camera whilst using it. If you’re shooting an interview you’d want to use an off camera mic or use a tripod and disable the IS.

The other thing that DSLR shooters tend to want from lenses is the ability to shoot shallow depth of field shots, after all that’s what the whole 35mm DSLR thing gives us over regular video cameras. With a max aperture of F4 the 24-105 isn’t going to give the crazy shallow DOF that you’d get from a 50mm f1.4, but it can still provide very shallow results for those times when you need them.

The two screen grabs below are from video I shot on the 5D using the 24-104 at F4. One shows the DOF at 105mm and the other fully wide at 24mm, both images are focused at 0.7m. As with most zoom lenses you’re going to achieve a shallower depth of field at the telephoto end.

I highly recommend the Canon 24-105 F4 IS L to anyone wanting a flexible lens for all round general shooting. The 24-70 2.8 is slightly better in terms of low light ability, but taking into account the longer zoom and the Image Stabilizer that the 24-105 brings to the table I think it’s a better choice, especially if you have a fast 50mm for the low light stuff.

In the UK try Warehouse Express as they normally offer great prices.