The result of the DSLR revolution, or the end of it?

I’m very excited to be seeing more news being announced about Sony’s answer to the DSLR revolution. This new camera which is expected to be available before NAB 2011 could give us all the benefits of using a large 35mm sensor along with fast SLR lenses as well as the practical solutions normally found in dedicated video cameras such as better monitoring, xlr sound inputs and a pro codec to work with. 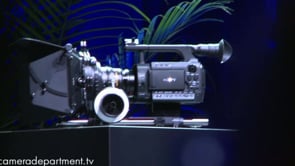 I personally think we’ll see the buzz return to the traditional video camera manufacturers 12 months from now, which is quite an interesting thought considering that the whole aftermarket manufacturing industry currently seems to have gone DSLR crazy. A dedicated 35mm video sensor would be designed with HD video formats in mind so would no doubt avoid the line twitter / aliasing issues which are the result of DSLR’s sensors providing too much resolution. DSLR’s are always going to have to cater to photographers first.

Canon or even Nikon may be planning on delivering an uncompressed full res video output from a DSLR, but they are always going to have to deal with sensors that are designed with still images in mind and provide work arounds to the huge resolutions involved.

I think the whole DSLR thing has been fantastic, it gave the video giants a big kick up the behind and made them move forward a lot faster than that might have done otherwise. They seem to be moving though so it’s going to be very interesting to see which direction they go in.

I did plan on investing in an EX1r for this years event work but I think I’m going to try and make my trusty 3 year old EX1 last one more season now and see what Sony do with this new camera and what they mean by “more affordable”.

The thought of an XDCAM-EX or better body offering the features of an EX1r but using a 35mm sensor along with the possibility to use various types of 35mm lenses is really exciting. It’s hard to know if that’s what Sony have in mind at present, but it would certainly get the attention of all those videographers out there who have jumped on the DSLR band wagon and invested money in 35mm glass.