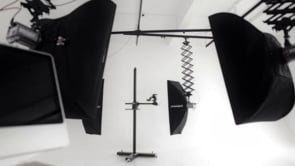 Fujifilm UK’s digital agency hired me to shoot and produce this 20 second video which they needed as part of an online advertising campaign. I worked with the agencies creative team who had developed an idea for Fujifilm’s F300EXR camera whereby the camera becomes the subject of a photo shoot, becoming the ‘Supermodel’ itself.

The agency supplied story boards for the project and the shoot took place in a Norwich based photographic studio. I decided to use my DSLR’s for the project mainly because the video needed to look quite abstract and show intriguing shots of the camera itself during the sequence which didn’t give away too much detail. The ultra shallow depth of field achievable with my Canon EF lenses were ideal to achieve the desired result.

All of the studio shots were done on the 5D markII with either the 24mm f1.4 or the 50mm f1.2. All of the camera close-ups and the close-ups of the photographers eye were done on the 7D using a 100mm f2.8 macro lens. The 7D’s cropped sensor gives the 100mm macro a bit more magnification than the full frame 5D making them a perfect match for ultra close-ups.

The biggest problem I faced with the 7D/100mm macro combination was trying to do focus pulls. The massive amount of magnification produced made it impossible to touch the camera in any way without causing shake. I tried a follow focus and whip but even that resulted in very noticeable vibrations.

After some thought I remembered my experiments with remote control using the Canon EOS utility software and decided to hitch the 7D up to my MacBook Pro and pull focus electronically.

This worked like a charm, I used the slowest focus change button on the laptop which resulted in the focus changes often taken a lot longer than desired but gave me more control over stopping in the right place. The video speed was then increased in post giving a very nice smooth focus pull but most importantly without any camera shake.

I don’t use any downloaded picture profiles on the DSLR’s, I just use the natural preset with the sharpness and contrast dialled down to minimum and the saturation dialled down a little. There’s always some colour tone difference between the two cameras which I normally deal with using the 3-way colour corrector in Final Cut Pro.

The sequence showing the front of the camera being lit at the end of the video was created using a series of stills shot with the photographers medium format camera which I then animated directly within Final Cut.

I used magic bullet looks on most of the shots as the client wanted a bleached out appearance and rather than over-exposing to much during tine shoot I preferred to do it in post as it then gave me more options.

If you have any other questions please don’t hesitate to leave a comment.

For more information about the gear I use click here