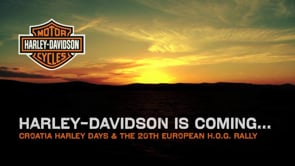 2011 will see the 20th European H.O.G. Rally being held in Biograd, Croatia. To help promote the event I was asked to create a short trailer showing a mixture of location footage and shots from previous events.

Biograd is located on the Adriatic coast overlooking the island of Pašman. The area is a fantastic mix of rugged mountains, blue seas and best of all for motorcycle enthusiasts has stunning riding roads along the bays of the adriatic.

The project started at with a 4am taxi pickup to take us to Gatwick, from there we flew out to Zagreb, Croatia’s capital city and then traveled by hire car to Biograd. Rather than take the easy three hour drive south along the motorway though we decided to head south-west over the Dinaric Alps. The start of this route took us through some areas that still showed scars from the war that took place in 1990’s with many building still riddled with bullet holes.

Once we hit the winding mountain roads though things changed a lot. I fitted one of my GoPro HD’s to the car for some of it and got some lovely shots as we drove through the mountain passes. As we crossed the last mountain before hitting the coast we were greeted by amazing views of the islands along the adriatic coast at sunset. I have to say that the views definitely rank up there with some of the best I’ve seen, enhanced by the fact that the mountains just seemed to fall away into the see.

it was 8pm (Croation) by the time we reached the coast though, a tiring 16 hrs after I left home but nothing could stop me making the most of those views. We found a place to stop and out came the EX1, tripod and glidetrack shooter which resulted in the tracking shots at the start of the video above.

As the sun went down it we were still a long way from Biograd and after a long day we were all starting to feel quite tired. Luckily my colleague from Harley-Davidson was doing the driving as I’m not sure I could have kept going the way he did. It took us another two hours to drive along the now very dark twisty coast road which although perfect for bikers was becoming quite tiresome as it snaked around one bay after another. I’ve never been quite so relieved to finally see a motorway which took us back on track to Biograd. We finally arrived at 10pm, very tired and hungry! Pizzas’s to the rescue!

We were only staying in Biograd one day so when I woke the next morning to see grey skies I was a little worried. The event will take place in mid Summer when it’s likely to be scorching hot so showing the location on a dull grey day wasn’t ideal.  Luckily though by the time we had a tour around the small city and checked out where the various parts of the event were going to take place things started to look up and by lunchtime we had clear blue skies.

I spent the next few hours shooting around the harbour area where the main event will be held. We arranged a boat to take us out and grab some wide shots of the city from the sea but when the boat turned up it was one of those sporty jobbies that are use for para-scending, it was pretty obvious that the boat ride was going to be challenging! We headed out into the bay at full pelt and the moment we started hitting some waves we were all getting soaked! It was a bit like shooting on a log flume, I fitted my Kata waterproof cover over the EX1 but as soon as I’d open the matte box water droplets would get all over the lens.

As with anything I shoot where I’m having to deal with camera shake I used a mixture of image stabilisation, overcranking and using my body to take out as much of the shake as possible. It was a challenge but I still managed to get some nice shots, although I did get soaked in the process.

I ended the day with a time-lapse of the sun going down over the islands and a call home to the family, followed by few beers back at the hotel bar in preparation for the journey home the next day.