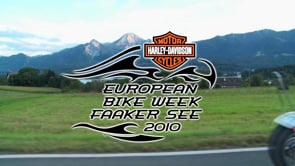 Shot at the 2010 European Bike Week in Faaker See, Austria for Harley-Davidson. Mostly Sony EX1 footage including all of the riding and aerial footage. There are a couple of 5D markII shots in here as well, but I much prefer the results and additional functionality the EX1 provides for these events.

The tracking shots are all done with the EX1 on my Glidetrack shooter which actually works pretty well considering it’s quite a big camera for that little slider.

The aerial shots are always fun to do, considering I normally have an issue with heights, I actually love shooting from a helicopter, as long as I’m well strapped in :)

I also put together a video showing the winners of the custom bike show held at the event. Unfortunately due to some rain at the start of the event the show was postponed at the last minute to an evening slot. This caused me a few issues, mainly because there were no lights on the stage and the many photographers strobes wreaked havoc on both the EX1 an 5D’s sensors.

I used my little lite-panels mini on the EX1 and that was pretty much the only light cast on the proceedings… not ideal!

The 5D was used as a second (wide shot) camera for the presentation and I only had the 24-105 F4 zoom with me so had to crank up the ISO to 6400. I think it performed pretty well considering that amount of gain. 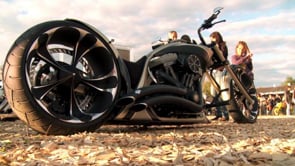