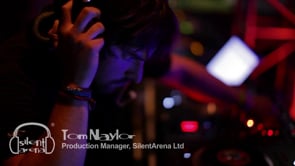 I shot this for SilentArena at the Reading Festival in August 2010. By far the biggest challenge with shooting any club type scene is trying to capture the closeness and the vibe of being at such an event. In the past I’ve struggled to do that, mainly because of shooting with smaller sensor cameras like my Sony EX1 which reveals way too much detail and tends to make the event look a lot more clinical than it feels at the time.

Have a look at the video I made for SilentArena last year which was all shot on the EX1 and compare that to this one and I think you’ll see what I mean. That event was a lot smaller then the one in Reading but was still packed with people yet the video didn’t quite capture the lighting and vibe of the event quite as well. 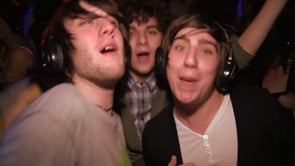 So what was the key ingredient in the newer video? Quite simply it was the Canon 5D mkII combined with the ultra-fast Canon 50mm f1.2 lens. This combination provides an extremely narrow depth of field and fantastic low light capability, perfect for capturing such an event.

There’s also some Sony EX1 footage in there too, simply because I needed some depth of field from time to time. The EX1 was also recording both the ambient audio as well as the music being transmitted so was running for most of the night.

I used my LitePanels mini from time to time on both cameras when I wanted to make the party goers that little bit more visible in the dark but most of the shots were done using the coloured disco lights.

Finally, if you ever get the chance to go along to a SilentArena disco I highly recommend going, they are fantastic.