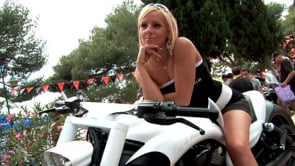 Filmed for Harley-Davidson in and Around Biograd during Croatia Harley Days in May 2011.

Both videos shown feature a combination of Sony EX1 and Canon 5D MkII shots. The only lens I used on the 5D was the Canon 24-105 IS which I generally have fitted with a Fader-ND filter. The tracking shots were done with my Glidetrack Shooter.

The bustling town of Biograd Na Moru, located midway along the western coast, was the epicentre of the celebrations. Its two-kilometre-long harbour promenade and beach was draped in black and orange as Harley-Davidson brought its legendary party to the town. This made shooting the event particularly tiring as it took a good 45 minutes to walk from one end to the other, something I had to do quite regularly!

Along the promenade, local bars and restaurants overlook the sea, a view temporarily complemented by a line of Harleys.

Between Biograd and Zadar, and beyond, visitors to the event were spoilt with magnificent biking roads. A real bikers paradise, the coastal roads feature a mix of hairpins, long sweeping bends, tunnels buried through the rocks, great road surfaces, and all set against the backdrop of the gleaming blue Adriatic Sea. I had the pleasure of riding a Harley to the event myself and the roads on the coast are absolutely amazing to ride. 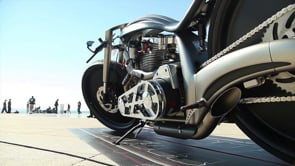 Friday’s Custom Bike Show moved out of town, to the neighbouring city of Zadar to the north. The show was held at the beautiful point named Salute to the Sun, beyond Zadar’s old town and harbour and attracted a range of motorcycles from across Europe that competed for first and second place in one of 10 categories.

Working alone at the Custom Bike Show is always a challenge, I generally get around 30 minutes to film detail shots of all of the winning bikes before the presentations start, it makes for one of the most stressful parts of each event. I shoot tracking shots of bikes with my 5D and Glidetrack before the judging starts when I have a bit more time but once things get busy I shoot solely with the trusty EX1.

During the presentations I grab closer shots with the EX1 handheld whilst getting something wider with the 5D on sticks.

Saturday’s parade saw more than 3,000 bikes line-up at Zadar’s Falkensteiner camping ground. As usual I shot the parade from the back of a Harley with the EX1. This can be particularly challenging holding the camera steady whilst not causing problems for the guy steering but after a few events I’m figuring out the best techniques to get nice shots. The road surface is the biggest contributor to whether the shots are good or not and in Croatia the roads were pretty good.

With the sun setting on the final night of partying, drawing the first Croatia Harley Days and 20th European H.O.G. rally to a close, the 65,000 people who have enjoyed this experience look forward to the next adventure… Did someone say Portugal…?

Music for both of these videos was kindly provided by “The Crave” who performed at the event. I’m always very driven by the music in my editing and it was a pleasure cutting to both of these tracks. Check them out!