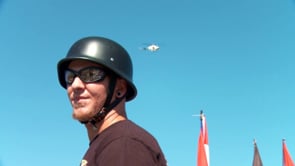 Filmed for Harley-Davidson in Faaker See, Austria during European Bike Week in September 2011.

Both the Sony EX1 and Canon 5D MkII were used to shoot at the event. The only lens I used on the 5D was the Canon 24-105 IS which I generally have fitted with a Fader-ND filter . The tracking shots were done with my Glidetrack Shooter.

This is always a great event to shoot, as with previous years I got to shoot aerial footage from a helicopter which is always the highlight of the shoot.

EBW is quite different to the other events on the Harley calendar, it has a much edgier feeling about it with bikers from various groups all over Europe attending. I’ve tried to capture that a little in this video by using the grittier looking 5D shots more.

Let me know what you think.