Last month I wrote about setting up this time-lapse and promised that I would post the results as soon as I could and I’m now able to do so. I’ve had to wait for the footage to be approved by Harley-Davidson so I’m sorry for the delay, here it is. 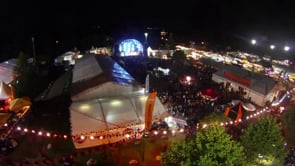 So as you might remember I decided to set up my GoPro on a Cherry Picker overlooking the event site that was hosting the European Bike Week in Faaker See, Austria. This seemed like the best solution at the time and the initial results looked great.

When I left Austria I left instructions for the cherry picker to be lowered once a day to check that the camera was still functioning and if required to change the card, the latter would only be required once because the 32Gig card installed would last 10 – 12 days by my estimation.

Of the 14 days the camera was running there was really only once where a problem developed, luckily this was discovered in the middle of the day and as it turns out the camera only missed around 4 hrs. I’m not really sure what happened that time, the GoPro just locked up by all accounts, the time-lapse icon and the red light were no longer flashing yet there was plenty of room on the card and the camera was turned on.

When I reviewed the footage after returning from Austria I discovered a much bigger problem, and one that I had not considered. The theory was that if we raised the cherry picker to it’s maximum height each time the camera would end up in roughly the same position, and that part actually worked well, what I hadn’t considered though was that the hydraulics themselves could actually lose pressure over time!

Luckily the main parts of the lift that controlled the height were reliable, it was the very last part of the lift that caused the biggest problem. This last section effected the angle of the camera and each time the cherry picker was re-extended the last section would slowly sag, settling after around fours. The change was only a small one, 2 degrees at most but it was enough to make the results look awful when played back in extreme fast forward.

When editing the footage I had to keyframe these rotations out, I couldn’t totally remove all signs of it in the time I had available but I managed to remove the worst of it. You can still see the evidence in the results though so I’ll chalk that up to a learning experience!

I also wanted to remove a lot of the night time footage and after doing so there was a visible jump in the joins. I ran the results though the warp stabiliser in after effects to try and smooth these out and it did a pretty good job, although again not perfect.

So all in all I learned a lot, the results are not perfect but I’m still happy with them, and more importantly so is the client.