I’ve been using a pair of Delkin dual chargers to keep my stock of Canon LP-E6′s charged up and although they have proved to be practical they are nowhere near as fast as the standard Canon charger. The Delkins have also proved to be a little unreliable when it comes to reporting the amount of charge a battery holds so I thought it would be good to try and find a better charger.

B&H agreed to send me a Pearstone Dual Battery Charger  for Canon LP-E6 for review so I spent some time putting it to test and seeing how it compares to my other chargers.

The Pearstone Dual Charger features two removable plates allowing you to charge various types of batteries by swapping out the plates accordingly, in this case though I only had the Canon LP-E6 battery plates. One of the nicest features of the charger is the large LCD display showing you the current status of any battery fitted. This is a welcome change from the flashing LED’s on the Canon charger and the seemingly erratic status lights on the delkin.

The display shows the current capacity of any batteries fitted in 5% increments as well as information about the various input and output voltages being delivered. This information is displayed on two screens which constantly cycle but can be overridden using the test button on the charger. The second screen displays the voltage output of the batteries.

The charger unit itself can be powered by either a standard mains lead or an also included 12V car adapter. I was pleased to see that the transformer unit was built into the charger itself so I didn’t have to deal with yet another external black brick. The unit I received included a US power cable but because the cable connects using a standard two pin connector it was simple to just plug in a UK cable from another charger.

One of the great things about the Pearstone Dual Charger is that it can be used to display information about your batteries without even being powered. Simply slide a battery or two on to the unit and after a few moments it will display the current capacity of the batteries and the associated output voltages. The LCD’s backlight will even light if you press the test button. That’s really handy if like me you end up with LP-E6’s kicking around all over the place and you’re never really sure how much juice they have left in them. I’ve found myself inserting them into the cameras before just to find out if they need charging.

When charging the unit includes automatically protects batteries from overheating and overcharging as well as having a failsafe mechanism should a short circuit occur. If two batteries are fitted they are charged totally independently to optimise for each batteries status.

As if that were not clever enough this charger has another trick up it’s sleeve when it comes to charging. On the side it has a standard 5.3V USB connector that can be used to charge things like Mobile phones or other devices that charge via USB. One of the best uses of this for me is to charge up a GoPro camera. If you use a lot of GoPro batteries you can also purchase a pair of GoPro battery plates for the charger allowing three batteries to be charged at a time on a single unit. 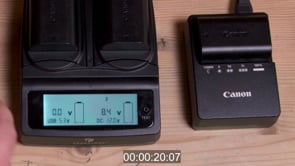 As you can see the Canon charger was slightly faster but there wasn’t much in it. The Canon completed it’s charge in 2:01 with the Pearstones batteries completing in 2:13 and 2:22. That’s a lot faster than the Delkin charger, even when it does work!

All in all I’m very impressed with the Pearstone Dual Charger, it’s great to be able to quickly check battery levels using the clear backlit LCD screen with or without the unit plugged in. The addition of the USB port is going to mean one less adapter to carry around too which is always nice.

Update: After using these chargers for a few months they proved to be unreliable for charging the Canon batteries for my C100 & C300. I’ve not had a problem with using them for Canon LP-E6’s for the 5D and 7D but for some reason they often fail to recognise the larger batteries have been connected.

The Pearstone Dual Charger is available exclusively from B&H Photovideo for $79.95