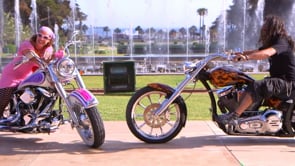 Here’s the latest video I shot and edited for Harley-Davidson Europe. The location of this rally was Cascais and surrounding areas in Portugal. The flag parade that happens towards the end of the rally (and the end of the video) started out on the famous Estoril race circuit which was a real blast to ride around.

Everything in the above video was shot on the Canon C300 and I made a lot of use of over cranking again this time. It’s a real shame to have to revert to 720p to do that on the C300 but I think the camera still manages to retain a lot of detail and certainly enough for these projects as the required delivery is 720p anyway.

For the flag parade I attached my SmallHD DP4 to a lanyard and help it in front of my whilst using the other hand to position the camera. This all happens on the back of a motorcycle with other bikes everywhere so it was a little bit daunting but worked great.

The only other notable kit was a glide track shooter HD and my Miller Tripod with the later only being used on five of the shots. I make a lot of use of the image stabilisers in the lenses and the warp stabiliser in CS6 so that I rarely have to use a tripod.

The song is by the excellent “Lovedrug” and was licensed with the help of The Music Bed.

If you have any questions about camera settings etc then just shout. These event videos have to be produced immediately after the shoot itself without any time off so I’m going to have a much needed day or two off :)