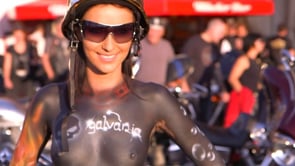 Once again, the picturesque and mountainous region of Carinthia played host to Europe’s biggest bike event in early September. Approximately 110,000 people descended upon the area surrounding Faaker See, turning the tranquil landscape into a tumultuous party of roaring V-Twin engines.

I flew out to shoot the event for Harley-Davidson again this year and as with previous years it turned out to be a very hectic yet amazing experience. I used the Canon C300 exclusively, mostly with the Canon 17-55 EFs lens although I did break out the 70-200 at one point to grab some close shots of the crowds enjoying bands.

The C300 is such a great all-round camera for this kind of work, during the day I configure it with the full monitor rig and a shotgun mic and then when I prefer to be a little less conspicuous I tend to remove the handle and monitor and just run either without a mic at all or with the Rode VideoMic Pro.

Towards the end of each rally I ride pillion in the parade and again the C300’s modular build proves useful as I hang my smallHD DP4 around my neck on a lanyard and just run the camera with it’s handle attached allowing me to shot using many angles that would be impossible using the cameras onboard monitor.

Because I had to fly out to Brasil to shoot another rally for Harley-Davidson soon after returning from Austria this one was edited by Paul Pearson (@pearsonpost) on twitter.

The wonderful, “Wild Blood” by Lovedrug was supplied by The Music Bed.