I’m a long time fan of using sliders for tracking shots, recently however I’ve had a couple of projects where a motorised slider would have made my life a lot easier so I decided to invest in a system from Kessler Crane who are the masters of motorised cine gear.

Kessler produce a huge range of sliders including the Pocket Dolly range, the CineSlider and the Shuttle Pod. Wanting a system that I can travel with I’d been thinking about buying one of the sliders in the Pocket Dolly range. On doing some research it seemed that the drag control on the CineSlider was a really handy feature but none of the standard pocket dolly range has a drag control.

Recently Kessler have introduced a new slider to the range in the form of the ‘Stealth‘. The Stealth features the drag control from the CineSlider and doesn’t have a crank so it suited my needs perfectly. It’s also pretty cool looking in black with a more angular design than the rounded pocket dolly.

So here’s what I decided to order…

I opted for the elektraDRIVE Bundle with basic controller v2.0. For more complex moves with multiple axis and precise speed control the more expensive electraDRIVE bundle with Oracle Controller would be a better choice but I preferred the more compact option as I planned on basic motion only. Here’s the details of what I ordered…

I opted for the 200 series motor as it’s slow enough to allow slower basic moves and time-lapses but is also fast enough to pull off normal motion moves. Using the optional speed doubler pulley also doubles it’s speed so very fast moves can be achieved if required. The basic package comes with a Bescor 12v battery and all the required wiring and power supply units as standard.

The kit was extremely well packed with all the individual items you can see below packed inside two larger cartons.

Opening the the white Kessler box reveals the custom soft case for the Kessler Stealth slider.

Inside the custom case you find the slider vacuum sealed in plastic and cardboard, you really get the feeling that Kessler are doing everything they can to ensure both a well protected product and a great experience for the purchaser.

On removing the Stealth Slider from its wrapping it felt suitably high quality and solid.

Both the rail and the cart are pre-drilled with various threaded mounting points allowing for a lot of attachment choices. Below you can see that Kessler pre-fitted the flat mounting plate which would be used for heads with a flat base.

I ordered the optional Low Profile Ball Head so I removed the flat adapter prior to fitting that.

Here you can see the Low Profile Ball Head ready for fitting. I was surprised by how small the plate is on the bottom of the head, it doesn’t really offer much area to tighten down onto the cart although it does lock solid. I soon found that the cart got scratched by attaching this ball head. The first of many war wounds I’m sure!

The ball head itself is great, very low, secure and easy to adjust. To loosen the ball head the handles are turned counter clockwise. The downside is that I found that this often led to me accidentally loosening the whole ball head from the cart rather then just releasing the lock on the ball. It would be great if there was an option to lock the ball head to the cart with a more reliable connection such as the ability to bolt it in place from underneath the cart.

The All-Terrain outrigger feet come in their own soft case which keeps them separated. It has to be said that these are a fantastic design. Each foot assembly consists of a central bar with a thumbscrew that’s retained so that it doesn’t get lost. The rotating foot parts are locked with a single clamp that makes folding out the feet really fast and simple.

Below you can see the feet extended, the rubber balls on each end allow the feet to grip at any angle from vertical to straight out. This makes levelling the slider on uneven ground a lot easier than the standard outrigger feet which offer less height adjustment.

Here you can see the feet being attached to the slider. Although they they use a single thumbscrew the tops have rubber strips attached which stops them slipping.

With the outrigger feet attached the slider starts to resemble some kind of stealthy insect! It’s rock solid with the feet all levelled and doesn’t feel like there’s any chance of it slipping. The only down side to this solution is that it can make the whole rig quite wide when the feet are extended.

With the basic slider set-up it’s now time to add the motion control. Firstly the knob atop the drag control and the spring beneath it are removed and replaced with the motor mount which fixes in place with a single clamp. As with the clamps on the feet this is the type that can be rotated to any resting position after it’s been tightened. I then added the drive gear replaced the drag adjustment knob for safe keeping although in this configuration it doesn’t have any effect.

Now for the motor itself. The two bolts shown below are removed prior to installation.

I actually removed the drive gear again from the motor mount as this needs to be located inside the motors drive belt and both dropped in to position together. Then the bolts are added again and the whole assembly is locked into place.

Now the controller itself is connected. As you can see the controller comes with all the cabling required as well as a mains power adapter including various plug type fittings.

The controller is connected to the motor using the supplied ethernet type cable which has a doubler on one end to allow connection to the male connector on the motor.

Power is supplied directly to the controller by using a cigarette type adapter which connects to the included Bescor 12v battery pack.

With everything connected up the operation of the slider is really simple. The controller has buttons for left and right with a speed dial in the middle. The speed dial has a single detent in the middle of it’s movement so you can feel when you go past centre. It’s very easy to dial in various speeds or ramp speeds up and down by pressing the buttons and turning the speed dial at the same time and it’s also possible to use the controller in a way where you press a button to start the movement and press again to stop.

The controller has three operating modes that are selectable by turning the speed knob all the way to the left and then pressing both direction buttons. The first mode is where you hold the buttons down to move, the second is where the buttons toggle between stop and start an the third mode is for time-lapse and has various submodes for setting pulse speeds and power levels. The basic controller isn’t quite as basic as one might think!

I found the speed of the 200 motor to be perfect for me, I rarely do fast moves and setting maximum on the controller gave a speed that is more than enough for what are usually my fastest slides. If however I do need to do something a bit faster I can fit the speed doubler wheel as shown below which doubles the available speeds over the standard version.

To finish up I fitted a Miller 313 QR plate to the low profile ball head so that I can use the same tripod plate as my Miller DS20 tripod. With the Canon C300 attached to the Stealth it worked perfectly and I can’t wait to get out and grab some footage with it.

This last pair of images show how the Kessler Multi-Angle Mounting Plate can be used to mount a camera for vertical slides. I found that the 200 motor handled my C300 just fine for straight up and down moves. My only concern with this position is the risk of one of those single threaded connectors slipping, I would much prefer the ball head to be secured in a way that it can’t rotate.

I really couldn’t leave you at this point without showing you the slider moving so here’s a very quick and simple video clip showing the rig in operation. As you can hear it can be quite noisy when running fast but then I don’t expect to be using it in situations where noise is a problem.

At the end of this clip you’ll see me using the slider without the motor attached. I’ve heard a few people saying that although they don’t actually use the crank handles on their sliders for movement it’s good to have one anyway because it adds inertia and allows the camera to come to a halt gracefully after a manual move. That did concern me a little but interestingly the camera seems to slow down really nicely after a push anyway so I’m glad I opted for one without the crank. 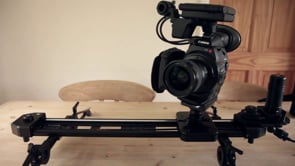 So now for the bad news! Actually that’s a little unfair as I think Kessler’s pricing is really good given the quality of the products they supply.

All of the items I ordered came in at $2,060. That’s quite an investment for a slider system but you need to bare in mind that the slider itself is around $800, all those extra options including the motion control system add to that cost.

Unfortunately Kessler don’t have any distributors in the UK so I ordered direct from their website. I paid $370 to have my order shipped to the UK by UPS which resulted in final costs of around $2,400 (around £1,500). Add to that £297 VAT and £47 Duty for the British tax man and as a UK buyer you’re looking at a total investment of around £1,850 inc taxes for the entire kit I ordered.

I’m totally blown away by the Kessler Stealth slider, the build quality is second to none and it works beautifully both motorised and operated by hand. The belt drive system with the drag control allows you to dial in the perfect amount of resistance for various weight cameras allowing for a much smoother slide than any slider I’ve used before.

My only reservation was the fitting of the low profile ball head, it was a shame to see it scratch up the cart of the slider.  That’s not really the fault of the slider itself though and other than marking the cart it might prove to be fine in use.

Pricing wise this setup was more expensive than any slider I’ve used before but that’s mostly due to shipping and import costs, if buying in the US the slider itself at $800 is really good value.

There’s not much more I can say, this product is great and I can’t wait to get out and use it! I’m also very excited about trying more Kessler Crane products in the future.