Anyone that’s been visiting my blog for a while will know that I’ve been shooting these events for Harley-Davidson for a few years now, in fact my first shoot for Harley was at this very same event in 2009 so this was my 6th visit to sunny St-Tropez in the south of France. 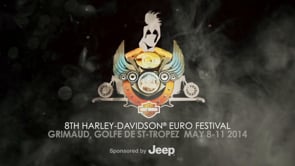 My kit hasn’t changed much over the last couple of years, here’s what I used to shoot this one…

As you can see I’ve learned to keep my kit fairly simple for this type of project now which I find quite liberating. I often see other camera operators at the events tied down with shoulder mount systems and bags of lenses and that’s not a pleasant experience when the suns beating down on you and you have a lot of walking to do. I often feel more akin to a stills photographer at the events now, I’m generally just walking around with the C300 without any other kit at all. With a battery life of over 4 hours I prefer to head out without any baggage and just return to base when either the camera needs something or I need a break, usually the later!

I did have a couple of very minor kit failures at the event. Firstly my 24-105 lens decided that it no longer wanted to be part of the L series of lenses and shed it’s prestigious red ring. Obviously this didn’t make in impact on it’s effectiveness but it’s the first time I’ve seen that happen so I thought it worthy of sharing. Luckily I saw it fall off so I kept hold of it and superglued it back on once I got home.

The other thing that happened which could have potentially caused me more problems was one of the legs on my Miller tripod pulled straight out of the unit when I was shooting at the main stage on the beach. Luckily I didn’t lose any of the various plastic washers and spacers that are part of the system and I was able to clean and reassemble the parts once I returned to my accommodation. To be fair to the tripod it’s been dragged all over Europe during it’s seven years of service, it’s been in the sea  multiple times, buried in sand,  used in rivers and left in the rain more times than I care to remember and this is the first time it’s required any attention. Once I got home I made a point of disassembling every leg adjuster and giving them a good clean, for now it seems as good as new again.

You might notice in the video is there’s a couple of aerial shots, these were the work of Lorenzo De Angeli who unbelievably rode to the event from Italy with the drone strapped to the back of his Harley! Lorenzo is a professional drone pilot / camera operator and fly’s much larger drones for big budget productions so it was a real pleasure to watch the precision with which he flew that thing.

Next for me is another Harley event at the start of June in Croatia so I’m already getting prepared for that one. I’m hoping to be able to get the C300 DPAF (Dual Pixel Auto Focus) update done on my camera before I go as that will be a huge help when filming from the back of a Harley, I’ll keep you updated on that one.