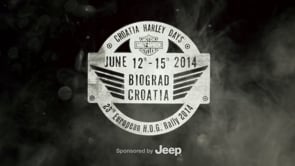 Biograd on Croatia’s Dalmatian coast played host to this years European HOG Rally and once again I had the pleasure of being invited to the event to film it and create a video showing the highlights of the location and the activities that took place.

Approximately 50,000 people descended upon the event site over the four days of the festival, with an estimated 25,000 bikers experiencing Croatia’s fantastic riding roads and coastline.

I had my Canon C300 upgraded to include the Dual Pixel Auto Focus (DPAF) feature just before flying out to Croatia and I have to say that it proved to be a lot more useful than I was expecting. I really wanted the DPAF feature for shooting from the back of a bike as it’s impossible to manually focus well in that situation but as it turned out I used the Auto Focus a lot more than I was expecting.

Used in combination with the Focus Lock feature which I programmed to the magnify button on the handgrip I found myself allowing the AF to gain initial focus much of the time and then locking the focus before composing my shots rather than punching in and focusing manually as I would have done previously.

For any shots that required slower focus pulls I’d just lock the AF and then manually focus as normal.

One situation that I found the DPAF feature really helped with was using the Tokina 11-16 f2.8. In the past I’ve run in to quite a few problems with focussing that lens accurately. Having to work quickly in the midday sun it’s very easy to think the lens is focussed correctly only to find the images are actually a little soft. The DPAF helped a lot when having to work fast shooting wide.

There’s a few slider and Jib shots thrown in courtesy of my Kessler Stealth Slider and Pocket Jib Traveller. The Drone shots were captured by my buddy Lorenzo De Angeli using a GoPro Hero 3 mounted to a hand built drone.