How to fly a drone from a moving ship

In this post I show you how to fly a drone from a ship along with some of the steps you can take to make sure you don’t lose your drone in the process! 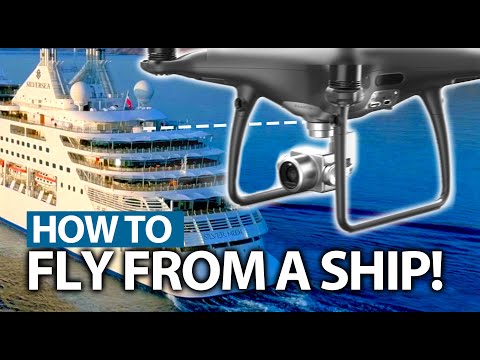 How to fly a drone from a ship or boat and NOT lose it!

I’ve been flying drones commercially since 2015 and in that time I’ve faced quite a few challenging locations and testing weather conditions. When I was recently commissioned to spend 20 days working onboard a cruise ship flying the drone I had to think about things very differently and change my planning and gear settings for the task.

First of all if you’re looking to fly a drone from a ship that you’ve booked on as a passenger then please reconsider as most cruise lines do not allow drones to be take on-board, let alone flown from the vessel. If like me though you’ve been commissioned to fly from a ship or have permission to do so then read on and I’ll share with you some things you might want to consider.

This post is primarily aimed at flying from a large ship where you don’t have the option to stop the vessel or change course. Many of the tips I give will still apply to smaller boats too so read on if thats something you plan to do as some of the advice given could also save your drone on a smaller boat too.

Whenever you fly a drone you have to make sure uninvolved people are safe and that you’re drone is not going to endanger anybody. Flying a drone from a ship means you’re going to have to limit access to the area you’re operating in so you’ll need a couple of people to help with this. Ask one of your helpers to manage anybody who tries to access the area you’re operating in so that you’re not disturbed whilst operating the drone.

If you find a good area to operate from on one of the ships decks be aware that decks above and below you may also be at risk so try to fly early in the day when there’s less chance of there being uninvolved people on those decks too.

If you’ve booked a very expensive cruise you’re not going to be very impressed if you open the luxury drapes in your cabin to see a drone buzzing around! Respect peoples privacy by keeping the drone far enough away from the ship so as to not risk invading peoples privacy.

I’ve already mentioned that you need somebody working with you to manage any people that enter the operating area of the drone but you’re also going to need another person to act as a spotter. Things happen really fast when your flying from a moving ship and its really easy to take your eyes off the drone for a moment only to look up and not be able to see it!

Have somebody working with you who’s sole responsibility is to have eyes on the drone the whole time. As you’ll hear later there’s no ‘return to home’ option in this scenario so knowing where the drone is at all times is paramount.

Find a suitable take off and landing area

I prefer to launch my drones from the deck and then hand catch them on return. To do this you need to find a suitable deck, ideally at the rear of the ship as that makes launching and landing easier as you don’t risk having the ship run in to the drone.

Check for wind speeds and make sure to take in to account the speed and direction that the ship is moving as well as the natural wind speed and direction. If the wind is moving in the opposite direction to the ship then bear in mind that your drone will need to be able to fly against the two speeds combined and have some power on tap in order to be able to catch up to the ship.

Have a walk around the ship to make sure you’re not going to run in to an area where the wind is being funnelled around the side of the ship as that could catch you out.

Ships usually have powerful radar systems and radio kit that can interfere with your signal to and from the drone. Whilst this is hard to test you can do some basic tests onboard before you fly but also be aware that your normal operating distances could be severely reduced so keep an eye on your signal strengths. In my experience video transmission from the drone was the only problem I ran in to but that could be dependent on the systems onboard the ship.

For me the right choice was the Phantom 4 Pro. Whilst this drone is old school in terms of it’s design it’s a very easy drone to hand catch and still has respectable image quality. The P4Pro has ATTI mode which is vital and while it’s by no means a cheap drone, I’d much rather lose a P4 to the sea than my Inspire 2!

My advice is to not do a compass calibration onboard the ship. Even on deck you’re going to be surrounded by lots of metal and sources of interference so it would be very hard to get a good calibration in that setting.

Whenever possible I took my Phantom on land and calibrated the compass in an open area away from metal objects or other sources of interference.

When launching on the ship I either held the drone during startup or placed it on something that positioned it far enough away from the deck to allow it to start without giving a compass error.

ATTI or Attitude Mode sets the drone so that it’s no longer using GPS positioning data to maintain its lateral position, The drone will maintain its altitude however its position will only be effected by the wind and your stick inputs.

The reason why ATTI mode is vital to fly a drone from a ship or boat is that if you try to launch the drone in GPS mode it will immediately assume it’s drifting in the wind and try to maintain its position by flying in the opposite direction to the ship, often with disastrous consequences if it hits a hand rail or other object in the process!

Also note that every time you power down the drone to change battery and media and the restart it with a fresh battery it will default to GPS mode regardless of the position of the switch on the controller. This almost caught me out on my second flight so make sure to cycle the switch and confirm ATTI mode in the app before launching the drone.

Geo zones are the defined areas around airports and other sensitive locations where it’s not possible to fly a drone. If you happen to be flying close to an airports geo zone then your drone will usually be stopped from entering it by the DJI software which is normally fine if you’re operating on the ground.

If you’re flying from the back of a ship and the ship enters a geo zone then the drone will not be able to follow you! You need to make sure that you are not going to be sailing in to any geo zones by checking the DJI maps in advance, especially of your going to be operating close to land from a ship.

When you start your drone it will define a home point on the map, but as you’re on a moving ship you will be moving away from that home point and it can soon be out of range of the drone. Whilst it’s best not to use return-to-home at any point I still recommend regularly updating the home point to your position just in case an RTH gets initiated. In the video I show how to update the home point to your location using the DJI Go 4 app.

Settings in the DJI app

In the video I show step by step instructions of how and why I set each of these settings however I will outline them below.

It goes without saying that flying from a moving ship is very risky, if anything happens with your connection to the drone then it’s gone so have decent insurance! Also, every time you land change the memory card, that way should the worst happen you’ll only have lost the most recent shots and not the footage from the whole day.

If you found these tips useful then please consider leaving a comment to let me know and it would be great if you could subscribe to my YouTube channel. Below I have posted the kit shown in the video as well as the kit used to create the video above.

Kit shown in the video: