In this post I review the SmallRig FX3 Half Cage. 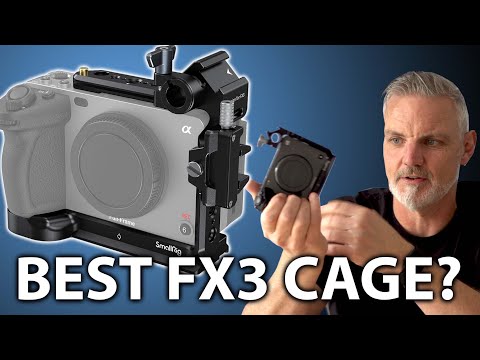 I purchased the Sony FX3 primarily for use on my Ronin-S Gimbal because it offers fantastic image quality with an incredibly small form factor. Whilst I didn’t want to make the camera unnecessarily larger I did want to add a camera cage to allow me to fit certain accessories to the camera and after researching cage options from various manufacturers I settled on the SmallRig FX3 Half Cage. Having used the cage for a few weeks now I wanted to share my thoughts on it and how it effects my use of the FX3.

So why do we need a cage for the FX3 when it’s marketed as having a ‘Cage-less’ Design? Whilst the FX3 does have some 1/4 inch threaded holes in its body, none are really good options for mounting things like monitors, arms, wireless audio packs, handles or other popular camera accessories. The FX3 also has a single tripod thread on the bottom which isn’t ideal as it allows the camera to work loose and start slipping when mounted to a tripod or gimbal.

What’s in the box?

In the box you get the half cage itself along with a nato rail, HDMI cable clamp, 15-12mm rod adapter and a hex key.

I chose the SmallRig FX3 half cage over a full cage because it still allows the FX3’s XLR handle to be used as well as third party handles when the supplied nato rail is fitted. The cage itself is nicely made with some really clever design elements including a 15mm rod attachment, an angled cold shoe and a small nato rail on the left side.

The base of the cage is constructed as an Arca-Swiss tripod attachment meaning the camera can be attached to a tripod or gimbal without the need for an additional tripod plate. I find this particularly useful with my Ronin-S as I have a SmallRig QR plate mounted to that which makes fitting the FX3 very easy.

The base is nicely designed to accommodate the battery compartment door and features four 1/4″ threaded holes allowing most tripod plates to be attached with multiple bolts. Another really nice touch is the addition of a magnetically attached mini screwdriver tool which can be used to fit and remove the cage. The design of the base looks to accommodate some kind of safety lock mechanism however it didn’t offer that functionality with either of my tripods.

The left side of the cage features a small section of nato rail and various threaded holes for the attachment of accessories including one 3/8″ hole with Arri style pin holes.

The top of the cage features a 15mm rod clamp with a 45 degree cold shoe. I really wasn’t sure I liked the idea of having the bulky 15mm rod holder when I ordered the cage however it turned out to be one of the best things about this cage and the main reason I would recommend it to others.

Also supplied is an HDMI cable clamp which can be fitted to the left side of the cage. I’ve used a few HDMI protectors before and often find them to be a bit of a pain to use as they are often incompatible with various types of cable. This SmallRig one however is great, it uses a pair of arms that grab the cable firmly and would likely work with most cables. I really like that it allows you to open and close the HDMI port door on the camera with the clamp still fitted.

I did find that the HDMI clamp can rattler when not using a cable however if you loosen it all the way using the knurled knob at the top of the cage it does lock open and then stops rattling. Fitting the HDMI clamp also covers most of the threaded holes pin the left of the cage so you’ll need to decide which is more important to you, it does however still leave one 1/4″ hole or the nato rail accessible on the side.

The top mounted nato rail fits perfectly using the two threaded holes on the top of the FX3. The rail is designed so that it does not interfere with the MI shoe on the camera and also features a spring loaded pin on the end so that and handle or monitor mount fitted has less chance of falling off should it become loose.  The rail also has a few threaded holes including one 3/8″ Arri style with locking pin holes.

My only criticism of the nato rail is that it uses hex bolts to be attached. Whilst these are common it would have been nice if these had been removable with the tool that attaches to the base.

The 15mm rod holder and its associated clamp do look quite imposing on top of the cage and it certainly can get in the way if you try to mount accessories to the MI/cold shoe on the camera. For instance I found that I cannot mount my Sony UWP-D21 direct to the camera with the half cage fitted.

Having the option to mount 15mm rods though does allow you to mount things like monitors and follow focus options to the camera. Given the lack of other usable mounting options when the XLR handle is fitted this alone makes the SmallRig cage very useful.

I much prefer using the FX3 with the cage fitted, it extends the grip making it much easier to hold. Being able to attach the camera directly to my tripod and gimbal is a huge time saver.  The HDMI clamp works really well and the cold shoe is great for fitting my Sony UWP-D21 Wireless unit, especially if I’m operating the camera on the left side as it allows me to see the screen on the receiver easily.

The Top Nato Rail works well, if I’m not using a shotgun mic I’ll often fit a SmallRig Top handle backwards with my Atomos Shinobi monitor on the end of it which makes for a nicely balanced rig.

When using the FX3’s XLR handle the 15mm rod holder offers a fantastic solution for mounting a monitor. In the video above I show how I rig my monitor using 15mm rods and I’d highly recommend that setup over mounting a monitor on the XLR handle. The 15mm rod holder can also be used to mount a focus motor or follow focus should you wish to do that.

All in all I’d say the SmallRig FX3 half cage is a must buy for the Sony FX3 if you plan on using it with accessories. At the time of writing this post the cage sells on Amazon for £76 or $89. View latest prices

If you found this SmallRig FX3 Half Cage Review useful then please consider commenting, it’s always good to know if these posts have helped people.

You can also view this review video on my YouTube channel

Kit shown in the video

The following are affiliate links. If you use these links to purchase products then I will make a small commission on the sale which is used to fund the production of these posts. Thanks for your support.

Viewing and changing exposure settings on the @sonyproeurope FX3 has become a lot easier thanks to this clever little monitor from @Portkeys_global.