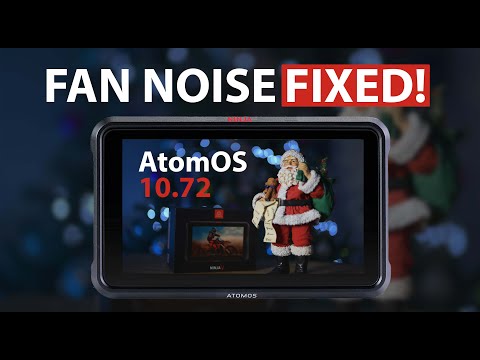 Atomos have recently announced a Ninja V firmware update to AtomOS 10.72. The firmware brings new features for users of the AtomX Sync Module allowing remote control of the recorder.

The 10.72 update also allows manual control of the Ninja V cooling fan giving the operator the ability to stop the recorder ramping up the fan in the middle of a shoot. In previous versions of the firmware the Ninja V would automatically increase the fan speed when required as the device started to heat up. The fan on the Ninja V is really quite loud so as it speeds up it becomes loud enough to be captured by mics if recording an interview or other scene in a quiet environment.

Atomos have added three new options for cooling on the Power setup menu.

Automatic cooling mode is still available as an option but it’s also now possible to manually set the cooling mode to either low or medium. The low setting maintains the fan speed at the lowest speed you’d normally expect from the Ninja V, similar to when the device is in idle and not recording. Medium make the fan quite a lot louder and is similar to where the noise would be during recording once the Ninja starts to heat up.

Atomos have said that setting the fan seed to low in warmer environments can result in the Ninja V overheating. I tried running my Ninja V recording ProRes RAW HQ 4k/60 for almost an hour in a 20°C room temperature and it didn’t shut down or stop recording. Atomos advise customers to test the unit in different temperatures to evaluate running in to overheating issues.

Another new option is the Turbo Cool switch. When engaged the Ninja V will ramp up it’s fan as much as possible whenever the device stops recording in order to remove built up heat. As soon as you start recording again the fan will return to the manual speed set in the cooling mode.

This final switch dims the display when recording to reduce heat buildup as much as possible.

Updating your Ninja V or V+ to AtomOS 10.72 is straightforward. Firstly download the update, then extract the ATOMNJV.FW update file and place it on a formatted Ninja V SSD.

Next place the SSD on the Ninja and when you switch it on the firmware will automatically be installed.

The following are affiliate links. If you use these links to purchase products then I will make a small commission on the sale which is used to fund the production of these posts.

I've just posted a review of the Tilta Mirage Matte Box including testing the VND against the @PolarProUSA PMVND. Hoping to try some 95mm @Vaxis20 filters with it soon.